Skip to content
Home/The Math of Giving Back
Donate Now

The Math of Giving Back

Jesse can remember exactly what the lunch trays at the Syracuse YMCA looked like. As a child, he often went there for a free meal.

“They were this weird tan color, kind of speckled like eggshells,” he recalled. “And glassy smooth.”

Now an adult, this programmer, developer, and engineer is carefully calculating how he can grow food for our community in his own backyard — helping people like him who know what hunger feels like.

If not liver, then a knuckle sandwich

By the age of 10, Jesse became familiar with trauma. Living with his biological mom and stepdad in Syracuse “was fairly abusive.”

“We lived in the bad part of town, and I remember walking myself to school through that bad part,” he said. “I’ve been homeless, I haven’t had food, I’ve been poor, I’ve been on food stamps. It’s one thing if a parent makes the choice to do something wrong. But when you willingly drag children into your bad decisions…” Jesse bit his lip and looked at the wall.

Jesse would go hungry for days. Sometimes, however, his stepdad hunted deer; he would butcher and cure them in the garage, and Jesse ate the same deer for months. One day, his stepdad prepared its liver.

“The options were to eat it or starve. And if you didn’t comply, you were beaten.”

Even in light of his circumstances, Jesse remembers moments of joy. “I played in the sprinklers and ran around. We had pet cockroaches! I remember the laughs at the Y.”

When he turned 10, Jesse was sent to live with his biological dad and stepmom in rural Alaska. A similarly difficult situation, he left as soon as he turned nineteen, moving to Boston for a chance at a better, healthier life. 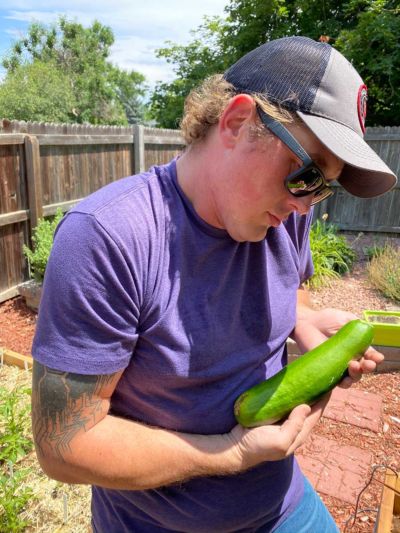 A kind soul with a sense of humor, too: Jesse “cradles” a baby zucchini in his backyard garden.
All photos courtesy of Jesse Noller.

The good you can do

Many years later, Jesse moved once more — this time to Colorado. Microsoft had offered him a job.

As soon as he arrived, Jesse looked for opportunities to give back to his new community. When his office decided to do corporate volunteering at Community Food Share, Jesse immediately said, “Sign me up!”

Soon after that first shift, Jesse was coming in every Friday. When asked what kept bringing him back, he replied, “I know that all of our lives are hard, and that it’s a constant struggle.” After years of abuse and neglect, Jesse said, he has fought substance abuse and mental illness. “I was too ‘manly’ to admit I had been destroyed, but I had been. No one should have to worry about what they’re going to eat. I’ve lived with the rage that comes with living like that, the rage and hopelessness. Volunteering here, I can see tangible relief in the participants, a brief spark.”

And as an engineer, he always comes back to the numbers: “The single amount of good a place like Community Food Share can do in a day…the math is simple.”

Growing community, one seedling at a time

When coronavirus hit and Jesse became unable to volunteer for medical reasons, he searched for a new way to support our food bank. He found it in our Garden Share program. Stuck at home, he realized that the four large garden beds in his rental’s backyard had the potential to feed those in need. His lack of gardening experience didn’t deter him: “I am an engineer, so I thought I could really optimize my garden beds. I said, ‘I can do this by just doing math!’” 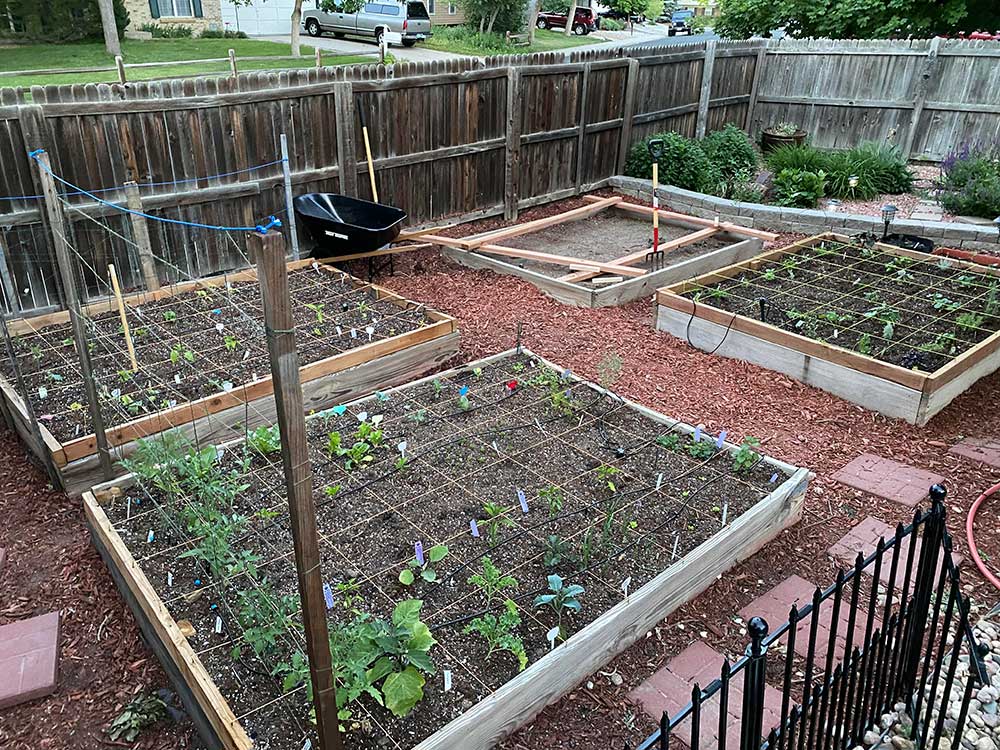 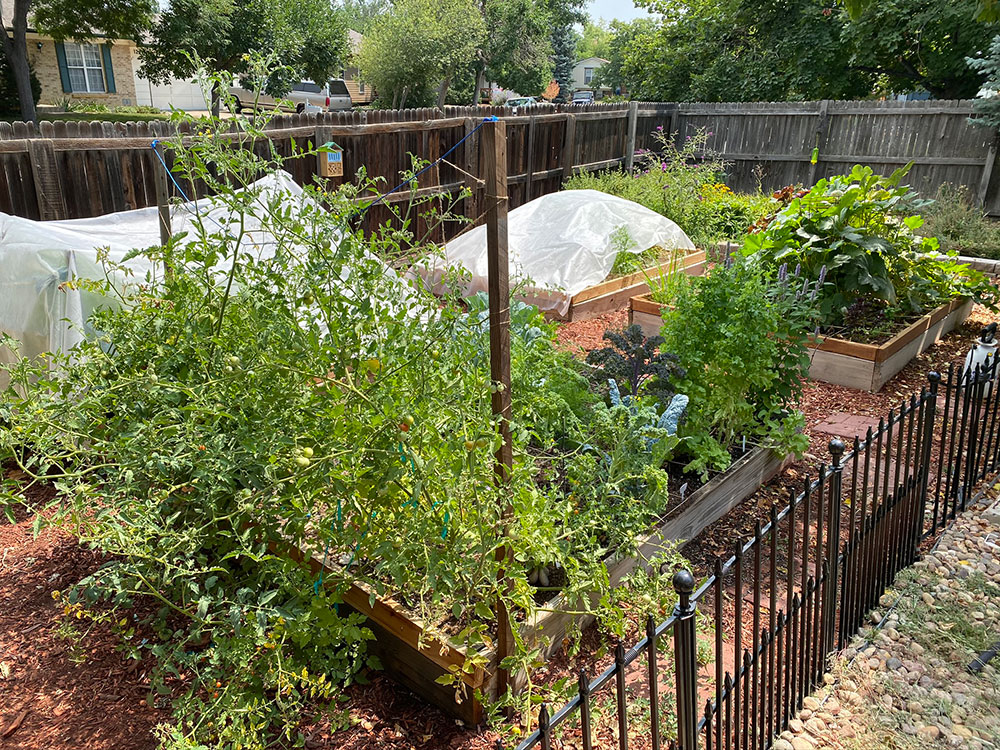 Jesse carefully divided the large garden beds into squares, dedicating each section to a different seedling: snap peas, cucumbers, radishes, bell peppers, kale, watermelon, and more. Then, he got to work.

Months into the growing season, his acute attention to detail is paying off. Jesse’s garden is flourishing — he has already donated over 150 pounds of fresh produce to our neighbors. He has started his own mushroom cultivation and chicken coop too, and he now dreams of getting a house with greenhouses to grow even more. “I could donate food, sell some of it, and also teach people to grow it themselves,” he smiled. “I’ve learned how to do all this stuff, so now, how can I use it to start building a sense of community I never had?”

As a food bank, food assistance is what we do. But there’s something else we try to achieve as well: bringing people together, sharing their stories, and co-creating a community with people like Jesse.

In his words, “I feel the injustice every time I see somebody, especially a kid or mother, looking for a hand; for somebody to see them and acknowledge that they’re another human being.

If I can grow a couple tomatoes and help somebody, and if I can donate my own blood, sweat, and tears, then I will.”

The math, for Jesse, is simple. 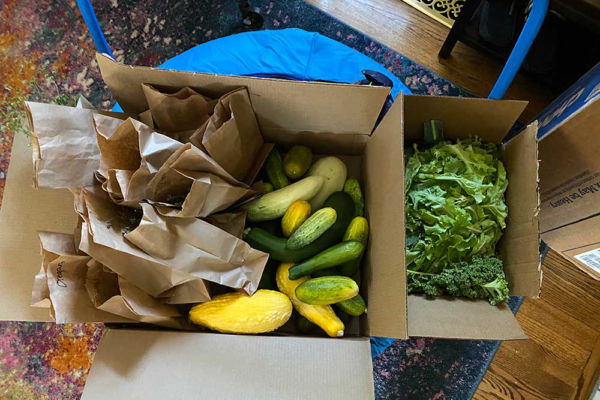 Jesse preps a donation box of fresh produce and herbs from his garden.